A couple days ago we were feeling a little off because of the storm preparation, we woke up early, had breakfast and took Dozer for a walk.  Not thinking anything else was out of the ordinary.  Jake left for work in the company vehicle and I finished getting ready for work.  I walked out to my scooter to head to work and this little beauty was no where to be seen! 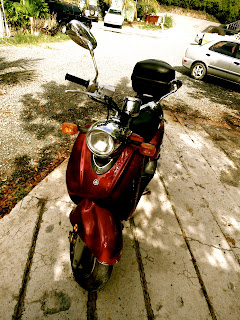 I walked around the parking lot for a couple minutes in shock that it wasn’t where I had parked it. I started to stress and called Jake.  His co-worker answered the phone and I immediately said, “I need to talk to Jake right now please!”  I informed him that my scooter was stolen and he said he would be right home.  I cried for a minute then I called my work and let them know I would not be in until later because I needed to deal with the situation.  I called the police and they said they would send an officer out (who knows how long this was going to take!).  I began the waiting and Jake arrived home, we talked about how we had gotten complacent and should have been more regular about locking it up.  Before the officer showed up, dispatch called me back and asked if the scooter would be registered under someone else and I told them it would be registered under my husband.  They said they may have located it.  The officer finally showed up (did not take as long as I had expected which is good news).  We gave our information and proof that we were the owners of the vehicle and he said he will go and check if it is ours.  He said that it was recovered the previous night in the back of a stolen pick up truck.  So these wise guys that stole my scooter stole and truck then my bike.  Anyway my scooter has been in forensics for 3 days and I will be able to get it from the impound lot on Monday.  Now the question is will the Virgin Islands make me pay to get it out even though it was stolen from me, we shall see, and it is highly likely.  Oh how this island drives me crazy!
Posted by Tina Montgomery at 6:41 PM