Fajardo is a small city located in the East Region of Puerto Rico bordering the Atlantic Ocean.  It is very popular amongst boaters because it is a good launch point when traveling to Culebra, Vieques, US Virgin Islands, and the British Virgin Islands.  The city offers a variety of amenities that we needed to complete boat projects, so it was a good stopping point for us.  Fajarado is also the home of the largest marina in the Caribbean, Marina Puerto Del Ray.  We made a reservation to stay at the marina while there to receive boat parts in the mail as well as have easy access while provisioning.

When we arrived at Marina Puerto Del Ray we were informed that we needed to check into U.S. Customs and Border Patrol.  It was odd to us since we had stayed within U.S. territories but we complied.  We spoke to them on the phone then we were asked to come down to their building to fill out some paperwork and pay for a boating decal that we needed for the year.  The U.S. Customs House was constructed in 1930 and is still in use.  On our four trips to the building I wasn't aware of this fact or I would have taken a picture. Anyway, that was a hassle for the next couple of days due to island time and normal Caribbean situations, but we worked around it and got everything done.

Most of our days were spent shopping (for boat parts, food and essentials), completing boat maintenance and repair and doing chores that were easier to do on land. It was nice to have easy access to West Marine and other places that we have missed while living in St. Thomas.  We drove to San Juan one day to get some parts from that West Marine and provision at Costco.  San Juan is about an hour from Fajardo so we took a whole day to get everything there that we needed.

Fajardo was successful but didn't feel like a vacation.  We were working hard most of the time and tried to complete everything in a timely manner.  At the end of the day our favorite part was the long hot showers at the marina.  We were exhausted but felt productive with our time there.   I wish I would have taken more pictures, but the ones I have document what the days were like. 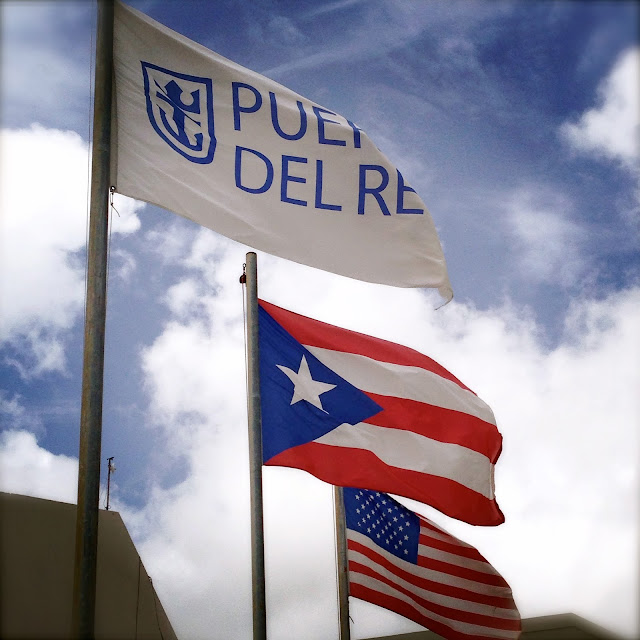 Posted by Tina Montgomery at 8:21 AM